How I learned to cook.

It took a while.

Cooking was always in my life, but this is when I really started cooking myself and I appreciated every flavor both my parents would create every night. Every weekend my dad would make scallion pancakes for my mom. I finally picked up the roller and gave it a go. It was terrible, but I did it. My grandmother would cook these amazing braised soups. And her pickles. A simple recipe that I still make today. I grew up in New Jersey where my parents also owned a Chinese restaurant as a side hustle. My mom was a nurse and my dad was a biochemist at Merck.

My dad would make his infamous soy sauce wings. He must have marinated them overnight because they were full of ginger and garlic flavor. I would come home after three hours of soccer or basketball practice and devour them before they got to the dinner table. On weekends, my parents would go to their friends’ homes and play mahjong and sing karaoke. I had the option of eating leftovers, frozen dinner or start cooking myself. I finally asked my dad how to make the wings and I started cooking more and more. I had seen my brother broil steak in the oven. So I started doing the same. I never got that perfect sear, but I didn’t know what that was. Note, I definitely didn’t start having parties on the weekends and inviting friends over while my parents were playing mahjong till 2 am.

I got into UMass Amherst and applied to live in the international dorm room. Rumor had it, they had the best rooms. This is where I met the Asian crew. There were always 5-10 of them in the kitchen, cooking up a storm. It was like a pot luck with delicious food. Some of the food I had never had before. Tofu with scallions heated up by hot oil, drizzled with a hot and spicy chili sauce and topped with some kind of pickle they bought at the store. I still need to ask them what it was. My contribution was my dad’s fish dish. The sauce was key. That crew was always so nice and inclusive. I’m not sure anyone was ever hungry in that dorm.

I got my first job as a web designer for Sony Pictures Digital Entertainment. I was living with my sister in a two bedroom apartment on the Upper West Side with my own room and bathroom. If you are not from New York, you must know this was unheard of. I don’t even want to tell you how cheap my rent was. Thank you Fannie! I started cooking out of the Naked Chef cookbook. Recipes always seemed off and not perfect. I was still a newbie cooking recipes. It was always so intimidating. Food Network was definitely in my life as I watched old school dubbed episodes of Iron Chef.

What do I do now?

I got laid off from my job as they were relocating everyone to the West Coast. I decided I didn’t want to be a web designer and to continue my love for food. I enrolled at the French Culinary Institute. You know, where Bobby Flay went. Also now known as the International Culinary Center. I quickly learned I needed money still. Two weeks after being laid off, I got a freelance gig, thanks to my friend Russ, at Condé Nast Bridal Group. A lesbian who couldn’t get married legally at the time as their web designer. Yeah. That makes sense. I was the web designer who would walk into the elevator in flip flops, holes in my jeans and a t-shirt. Everyone else looked amazing. I quit culinary school after three months. Condé hired me full-time and I also realized I don’t like school or taking tests.

I staged at a restaurant where my good friend Lee Farrington was the chef. I was so excited and nervous as all hell to be on the line. It was a tiny maybe 100 sq ft space where plate after plate would be turned out. The adrenaline rush you get after working was exhilarating. If you are in Maine, you should check out her restaurant she opened with her wife called LB Kitchen.

I applied for a job at the Food Network. They were looking for a senior web designer. It was perfect. My resumé could not have looked better. I had culinary and great job experience. It was the first job I got without my network of friends and co-workers. I got to take photos at the first Iron Chef America episode. There was a table of dishes on a cart. The camera crew started eating a couple dishes. I took a bite. It was glorious. Someone came over and scolded everyone quickly after as they were saving them for beauty shots. Whoops! 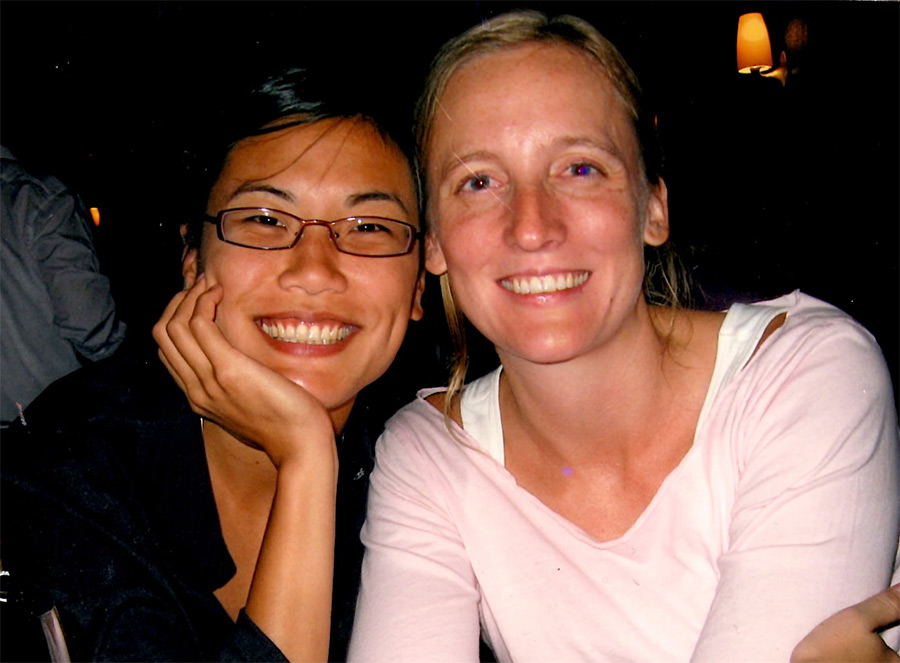 The Love of My LIfe

Food Network was where I met Carrie. We fell madly in love. Kept it secret at the office for a while, only to be discovered kissing on the street by co-workers. We both came out to our parents and moved in together immediately like lesbians do. This is a much longer funny story. We’ll tell that story another time. But I will say, her best friend thought it wouldn’t last for more than six months. I’m looking at you AMFK.

I staged at a restaurant where my good friend Lee Farrington was the chef. I was so excited and nervous as all hell to be on the line. It was a tiny maybe 100 sq ft space where plate after plate would be turned out. The adrenaline rush you get after working was exhilarating. If you are in Maine, you should check out her restaurant she opened with her wife called LB Kitchen.

Our Dream Was Born and I Finally Learn How to Cook

Everything comes together when you find that one person who was made for you. We decided we would move to Portland, OR and start a restaurant. But I still didn’t know how to cook and Carrie hadn’t worked at a restaurant since her high school days at Denny’s. In comes my friend Chef Daniel Eardley of Chestnut Restaurant. I quit my cushy web design job at FoodNetwork.com and Daniel hired me as a pantry cook. He always said,”It’s the Huang way to the top!”

Daniel taught me everything from salad dressings to foie gras torchon to dark chocolate budinos that has been a secret until now. As the #metoo movement unfolded, I felt lucky. I didn’t have those sh*tty experiences that most women have working in kitchens. I was myself and so was the team. Daniel was nothing but respectful, hard at times so I’d remember things, and fun in the kitchen and outside of work. I trained under him and the team for two and a half years. By the time I left, I’d worked all three stations, pantry, sauté and grill. It was here when I had my lightbulb moment. Daniel told me the formula to sauces. I can now cook for a party of 200 if I need to. I’m excited to share some of his recipes and continue his legacy. He was a good friend. Chef Daniel Eardley: 1971-2018. 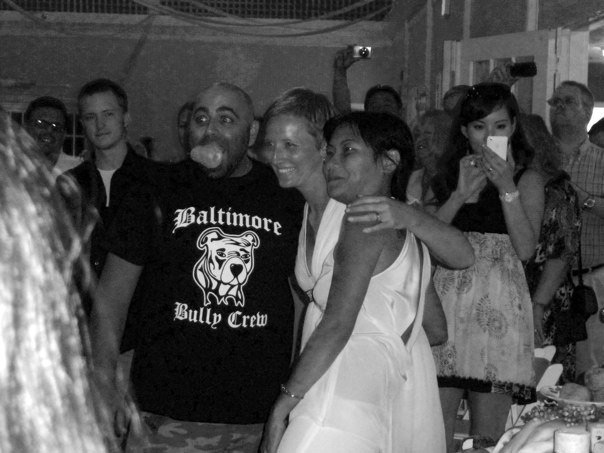 Best Day of My LIfe

It was finally legal for us to get married in Connecticut. Not New York, but Connecticut where Carrie grew up. We didn’t think everyone would come. Almost everyone did. Except my mom. But it’s okay. We still love her. Duff Goldman and team made our cake. The cake was a Cezanne inspired wine and cheese plate. People didn’t even know it was the cake. My dad made a speech. “Jannie was good at soccer, basketball, track and field. She was sporty. Like a boy.” He had the whole room engaged. By the end of the night, we were dancing on tables, a Ulias/Welch tradition.

It took two years for us to extricate ourselves from New York. There is some kind of magnetic field that won’t let you go. Our apartment wasn’t selling in Brooklyn because of the recession. We decided to leave anyway and hoped the apartment would sell in time.

We drove across the country with our Dyson vacuum in the backseat. Man, I love that stupid vacuum. We rented a room and bathroom in a share house. That’s a whole other story and lasted only three months. Carrie found a server job. I staged at a restaurant and was hired immediately. Working as a freelance designer for an east coast digital agency during the day and then off to the restaurant by 2 pm.

On Valentine’s Day, after working as a server for three months, Carrie came home and said, “I don’t want to do this anymore.”

I said, “Oh good because I don’t want to clean any more floors.”

And thus, Little Green Pickle was born. A PR and digital agency for the food and drink industry. Soon after, we met our business partner Mike, festival director Emily, and started Feast Portland, a nationally recognized multi-day food and drink festival. Again. We. Are. Nuts.

Best Day of My Life. Again!

It took us two years to make T. Lots of IUIs first with me and then Carrie. Carrie was a champion. After five hours of active labor, T was born via c-section. I knew I would give all my love to this kid. I just didn’t realize how much love I had to give. After six months, we started introducing food to T. I cooked all the food. I would cook the crap out of small bite sized pieces of vegetables so he wouldn’t choke. It’s kind of crazy where you just give them something like shrimp or peanut butter and cross your fingers they won’t have an allergic reaction. We are very lucky.

I had several more IUIs and two IVFs. They were able to retrieve two eggs at both IVFs. In both instances, they injected the sperm and the eggs disintegrated. I was a true lesbian. Luckily, I have a fertile partner who birthed our second.

Once E was born, we felt like we had everything we wanted. Two healthy and amazing kids to fill our hearts, make us laugh and cook for them until they can cook themselves.

“Momma, you’re the best cook in the whole world,” says T. He finishes his plate almost all the time now. He asks for steak constantly. There are days where E will demolish her plate. And other days she’ll have a banana and rice for dinner. I’ll take it.

When the pandemic hit, we really slowed down. We started to realize how much of our kids’ lives we missed because we were working all the time. What do I really want to do? I want to cook. It always comes back to cooking and family. I want to share my recipes and life with people. I want people to know there is no playbook for parenting whether gay or straight. You can just be yourself and enjoy every waking moment. It’s not perfect, but we love it. And here we are today with Just Cook Jannie.

Just cook! It’s not that deep.

Start Cooking
We use cookies and similar technologies to enable services and functionality on our site and to understand your interaction with our service. By clicking on accept, you agree to our use of such technologies for marketing and analytics. See Privacy Policy
Accept & Close